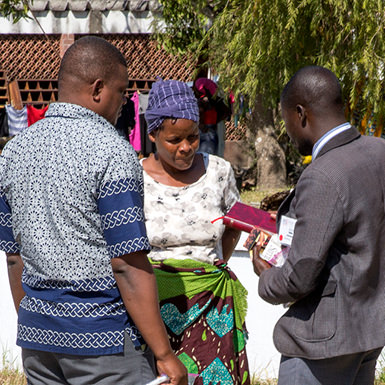 On October 19, 2019, we held an open-air meeting in the Mpatamatu urban area of Zambia. Mpatamatu is not only where I live, but also a highly-populated area and is very fertile for the sharing of the Gospel. We had three days of open-air meetings that lasted for two hours, and we also did one-on-one evangelism in the mornings.

There was a couple by the name of Mr. and Mrs. Banda who had serious marriage conflicts that were leading to divorce. They had a case in the local court and had a pending divorce. On Saturday, as we were witnessing one-on-one, we went to their house where I was welcomed in after my introduction and purpose for being there. I shared the Word of God with them and they later accepted Jesus Christ as their personal Savior. After that, they opened up more and explained their conflicts and their court issue with me.

They had been married for more than 7 years but did not have children yet, so they were accusing each other of being responsible for being childless. In Africa, this is a serious issue, especially non-Christians. So, the man started to look for a way he could send off the woman and look for a woman who could give him children.

I tried to counsel and assure them that it is God who gives children at the right time. I gave them an example of Abraham and his wife Sara who lived many years without a child then God gave them one in His own time…because God’s timing is the best. Later, they reconciled with one another. In the afternoon, they even attended our open-air meeting where I was preaching. On Sunday, they came to church. On Wednesday, they went and their divorce case in the local court. They said, “We are now saved, and we shall continue to live as husband and wife.”

Many people who heard their testimony and conversion were very happy for them. I too was very happy that the case was by the two of them with the view that they are going to live together as husband and wife because they are now saved and follow the Word of God as their guide

They are now in the counseling process so they can reach a new level in their marriage where they are growing and depending on God. To God be the glory!