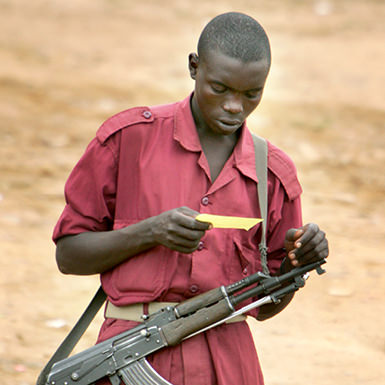 On June 22, during an open-air meeting, at the village center of Kotopchoi, we saw a great miracle of God saving a warrior. It’s very hard and rare for a Turkana warrior to confess Jesus Christ as Lord publicly. This man was attentively listening to the Gospel as we shared it and showed the flipchart. He not only raised his but also immediately came forward and knelt before me when we asked who wanted to receive Jesus Christ.

This man’s name is Aroikoni, he is 38 years old. Many people gathered there were amazed that he stood up to share his testimony after he received salvation. He confessed that he was illegally keeping a gun and he was willing to hand it over to the government. He asked me and three other people to come with him to his house (about 150 meters away) to collect the gun.

We agreed to go with him. We collected the gun then came back to finish our meeting. When we arrived back to the open air meeting, the news of the recovery of the gun had already reached the police. A land rover with 7 soldiers arrived at the scene. Seeing that the police would disperse the multitude, I asked them to first listen to Aroikoni’s testimony. They agreed. Many more people had already gathered there and Aroikoni testified.

At the end of his testimony, I asked the crowd if they thought this was possible for us humans. They responded, “No! It’s the miracle of God!”

On that day we led 98 people to Jesus including 4 of the policemen. We praised God and handed the gun over to the police. We gave all the glory to God! is now one of our good church members and will be baptized when we have enough rain for water.