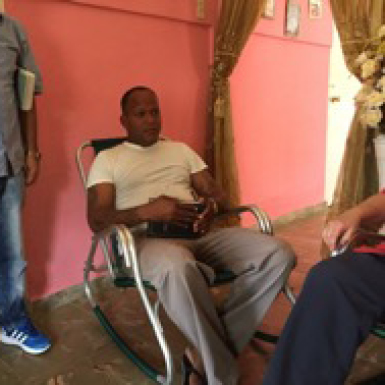 This is witch doctor Jose of San Juan Y Martinez, Cuba. I met Jose on February 8, 2018, in the house church he attends each Tuesday evening.  The following is his story.  Parts of this story were given to me directly by him, parts were furnished by others who knew him before and after his conversion, and parts are from a follow-up that I requested from our team in Cuba.

People who knew Jose by sight would cross to the other side of the street when they met him so that he could not touch them.  This is how much he was feared.  Other witch doctors would go the other way when they saw him because his power was so much greater than theirs.

He was reluctant to tell me his story because he said it was very sad to him that he had been so evil. He was encouraged to tell me about his conversion by his pastor, Pedro, a National Missionary for RSI.

He told me he was a very powerful witch doctor and could cause people many problems.  He was employed to place curses on people who had disagreements with others and almost always his curses were carried out.  It was reported later to me that he was responsible for the deaths of at least three men, though he never told me that.  He told me that he could conjure up demons and speak to them just as he and I were then speaking.

He had never been approached by a Christian.  Most people considered him so evil and so influenced by Satan that he was beyond redemption.  But one day, on the street, a boy of eight or ten placed a church flier in his hand and told him of a church meeting that night.  Jose said the flier felt warm in his hand so he believed this thing the boy spoke of must have some great power. Deciding he wanted this power for his own use he went to the church that night.

He said as he entered the door that most of the people immediately moved away from him, fearing that he was there for mischief.  But Pastor Pedro, along with another man and came up and greeted him.  They told him they had a seat for him in a pew upfront.  He was placed immediately in front of the make-shift screen used to display the words to the songs used in worship.

He said he sat staring straight ahead at the words and not looking to either side for he knew that people feared him.  He sat through the worship service and continued to look at the screen as Pedro began to preach.  Displayed on the screen was a beautiful pastoral scene with vivid colors.  He thought it strange they would continue to display a picture on the screen while the pastor preached. He looked at the projector and could see that it had been turned off.  He looked back to the screen, but the image was still there.

He stared at the image the entire time Pedro preached, not listening to the words. After a the image parted and a hand reached out toward Jose.  As it did, he could hear Pedro say “is there anyone here that wishes to give their life to Christ”.  Jose stood up indicating he wanted to receive Jesus.

He said when he spoke, there was a sudden severe burning in his feet that was so painful he had to sit back down.  The burning continued up to his legs as if he was on fire and it was all he could do not to scream out.  The sensation continued up to his thighs and then into his chest where it seized his heart and he thought his heart would be ripped from his chest.  It continued up into his neck and head where it exploded out of his ears and eyes with a bright light.

He said immediately afterward was the first time in his life that he truly felt at peace.  All of the darkness in his body had en cleansed away and he was refreshed in his soul.  Immediately, he and Pedro went to his home and destroyed all of his idols and altars built to worship Satan. Now Jose and Pedro meet each morning at 4:00 a.m. for discipleship.